PDi CRM for Partner Accounting uses an ODBC data source to generate the reports. The ODBC is named via the system parameters screen and if left as the default PDi CRM the application will attempt to update the ODBC and named database within pervasive.

In some cases, such as restricted access or a Client/Server install of pervasive, this may fail, and so a specific ODBC and named databases MUST be created.

This screen will allow for creating the named database using Pervasive DTO calls, but the ODBC creation on a local machine may fail if sufficient privileges are not available.

This screen replicates the functionality of the PCC, which can still be used for manual creation if the user does not have sufficient access. 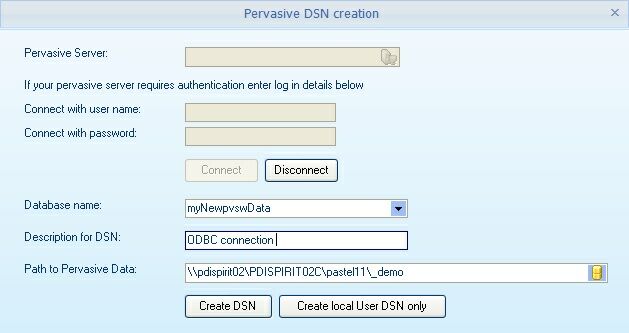 Connect - Press this button to make a connection to the Pervasive server. If the information is not valid or the pervasive server is unavailable, a message dialogue box will be displayed.

Database name: Select an existing named Pervasive database existing on the server or enter a new database (no spaces)

Description for the DSN: Enter a meaning description that will be displayed in the Windows ODBC (data sources) screen. This may be ODBC for the PDI CRM application or anything that allows the user/administrator to identify the user.

Path to Pervasive Data: Enter (or select) the location of the Pastel data; if the location is a mapped drive on a remote machine, then the path will be converted to UNC format

Press the Create DSN button to create the required settings

The Pervasive DTO will create/update the named database with the path entered and create a System ODBC DSN on the specified server.

If the local machine is not the same as the server, a User DSN will be created using the Pervasive Client ODBC connecting to the pervasive remote server.

If multiple users are connecting from the same workstation, it is recommended that the USER DSN be deleted from the local machine and a system DSN be created. The application will not attempt to create a Windows system ODBC as it is likely to fail due to insufficient user rights.

Create user local DSN only - if this button is enabled, the pervasive server entered is not the same as the local computer. Only the local Pervasive Client ODBC entry will be created for the current user ONLY if this button is used. When using this function, only the Database name and Description for the DSN need to be supplied, as the named database gives the data path within Pervasive's DBName.cf configuration file.